Kardamyli is a seaside village on the Gulf of Messinia 36 kilometers southeast of Kalamata, in the Mani Peninsula, on the outskirts of the majestic Mount Taygetos, with a reputation for attracting visitors seeking an alternative gateway to relaxation, inspiration and rediscovering the art of peaceful living.

Kardamyli, one of the seven superb villages offered to Achilles by Agamemnon to persuade him to rejoin the war against the Trojans, and also the only one still inhabited, it is a place full of contradictions, yet so perfectly harmonious that it creates a breathtaking feeling. It offers a perfect combination of sea and mountain, wild, yet tranquil nature, steep canyons and magical beaches, stone-built houses and light-bathed towers, silver-green olive groves and rocky shores, the towering Mt Taygetos and isolated little coves with turquoise waters.

Although the hotel is an ideal destination in itself, Kardamyli is a delight to discover. Surrounded by a lush escape of olive trees, pines and coniferous trees boasts a fascinating rocky shore with unexpected spots and beaches to enjoy the sea, while its winding trails invite you to explore the interior part of the region. 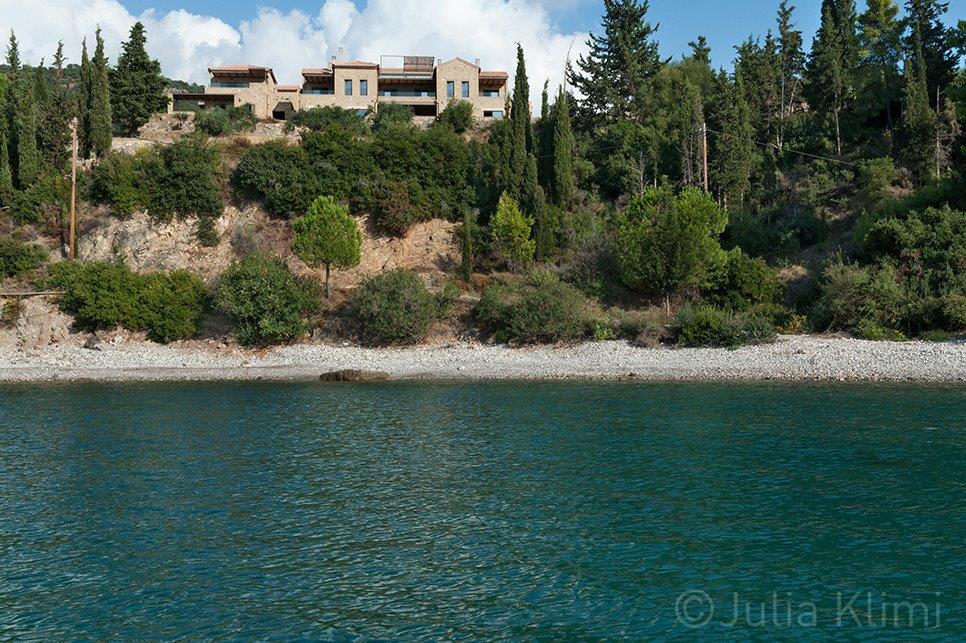 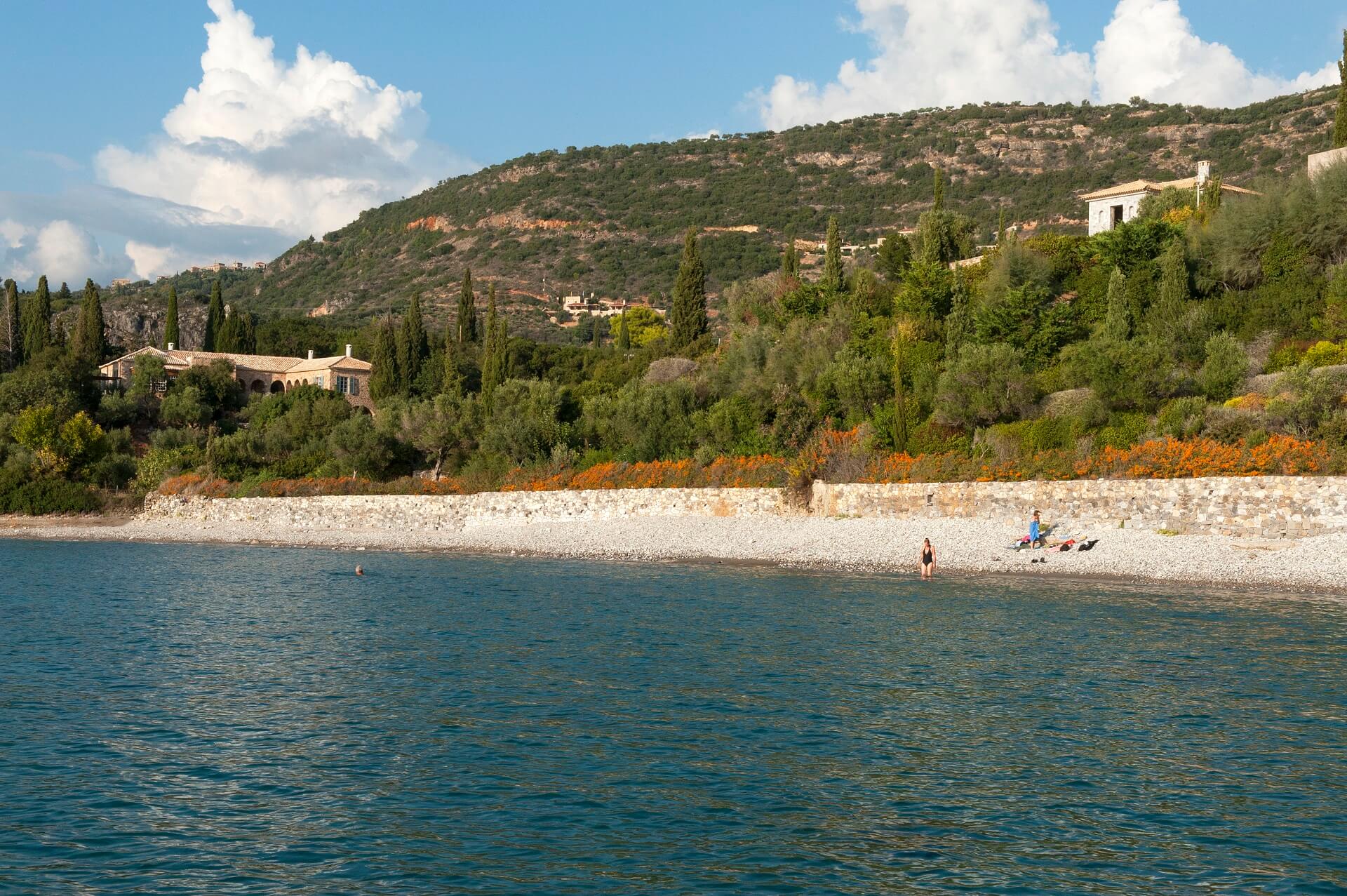 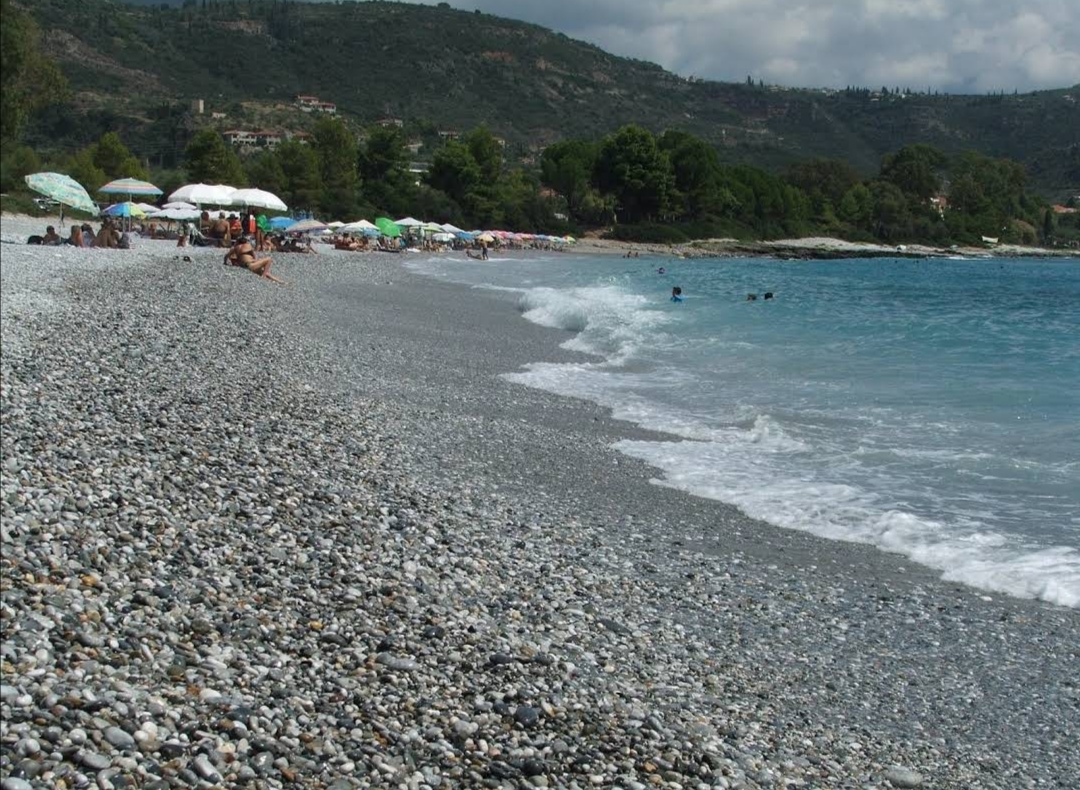 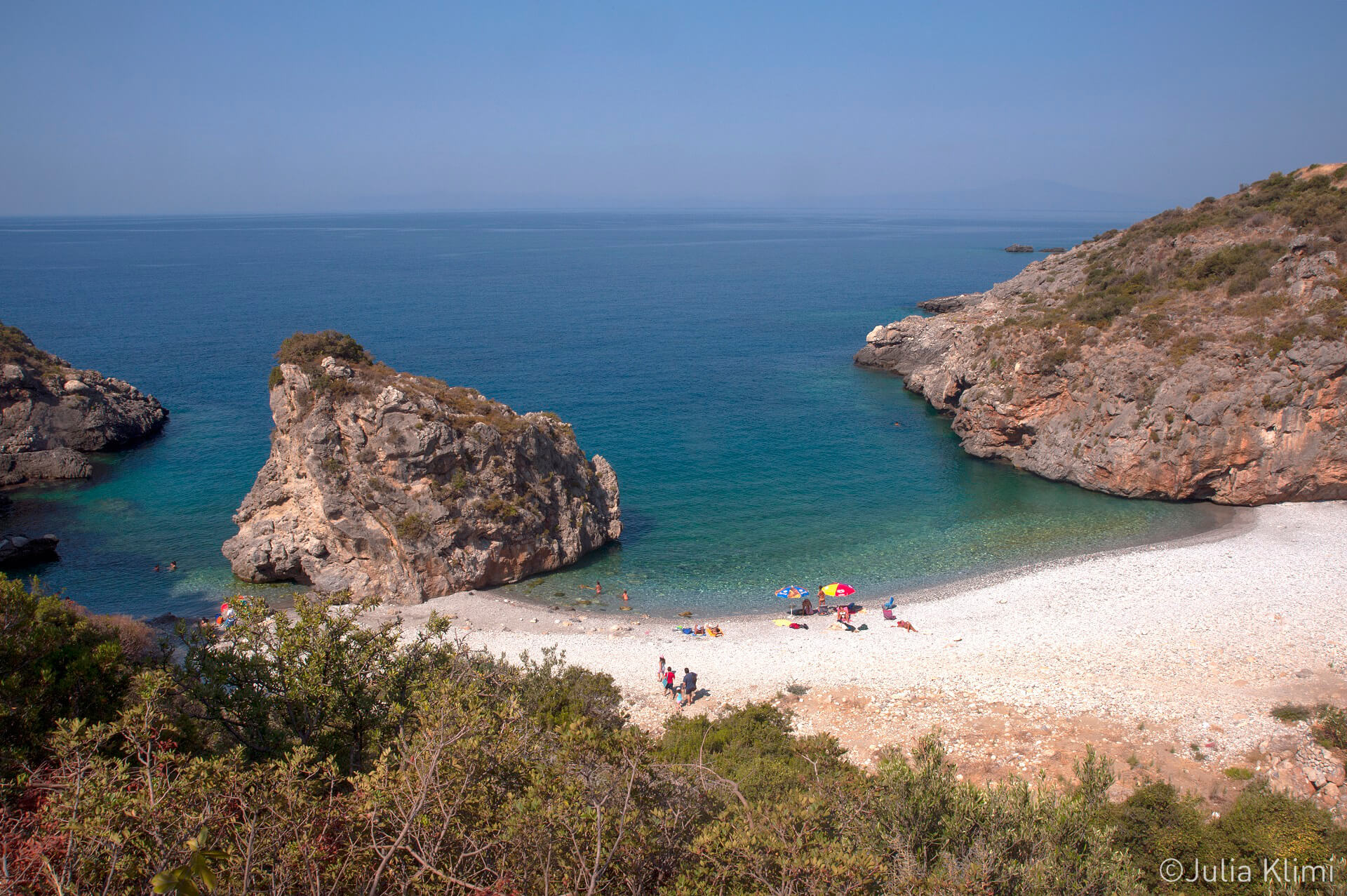 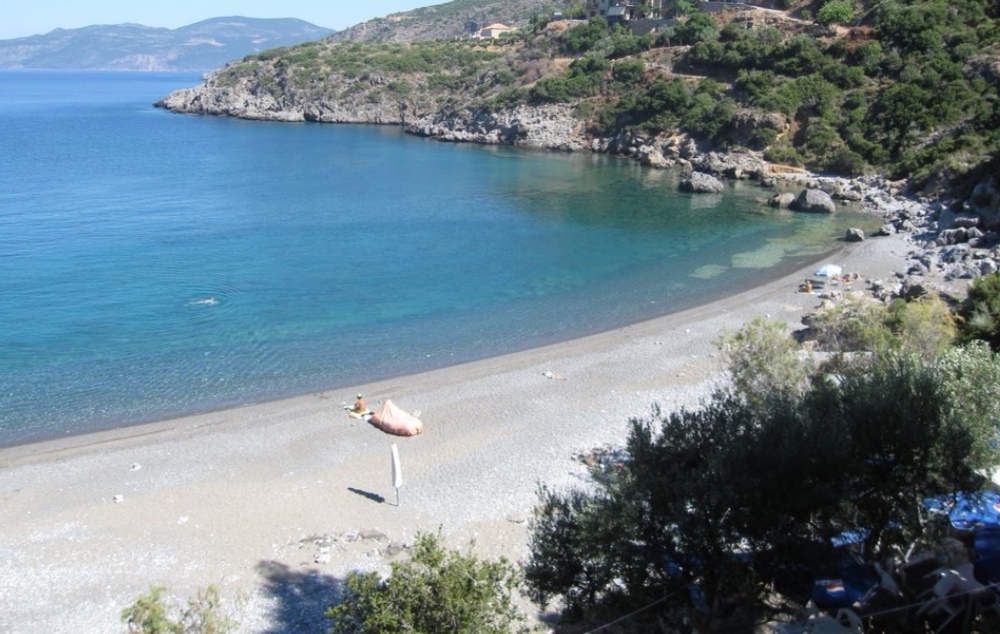 Directly below the hotel, within the picturesque harbor of Kardamyli, lies a small sheltered pebble beach only a 2-minute walk via a cobble path. Hotel guests can swim and sunbath there or they can give a try to the other beautiful beaches of the area:

Kalamitsi bay: A scenic beach with both pebbles and sand, and beautiful coniferous trees in the background, located about 800 meters from the hotel. This authentic beach does not offer any tourist facilities.

Ritsa beach: Hidden from the road, the main beach of Kardamyli is 1 kilometer long, with white pebbles and clear blue waters. When swimming there, one can see the pyramid-like highest peak of Mt. Taygetos, often snow-covered till the early summer months. Sun-loungers and umbrellas are available for rent, and there are a few tavernas and canteens for snacking.

Foneas beach: 4 kilometers down the coast, where the Noupanti gorge ends, lies a narrow pebble beach with deep blue waters and an impressively-large rock in the middle. A small canteen operates during the summer months.

Delphinia beach: Half a kilometer farther on (4.5 kilometers from Kardamyli), you’ll find this beautiful sheltered beach with sand and small pebbles, only a short walk from the road. A small canteen operates during the summer months. 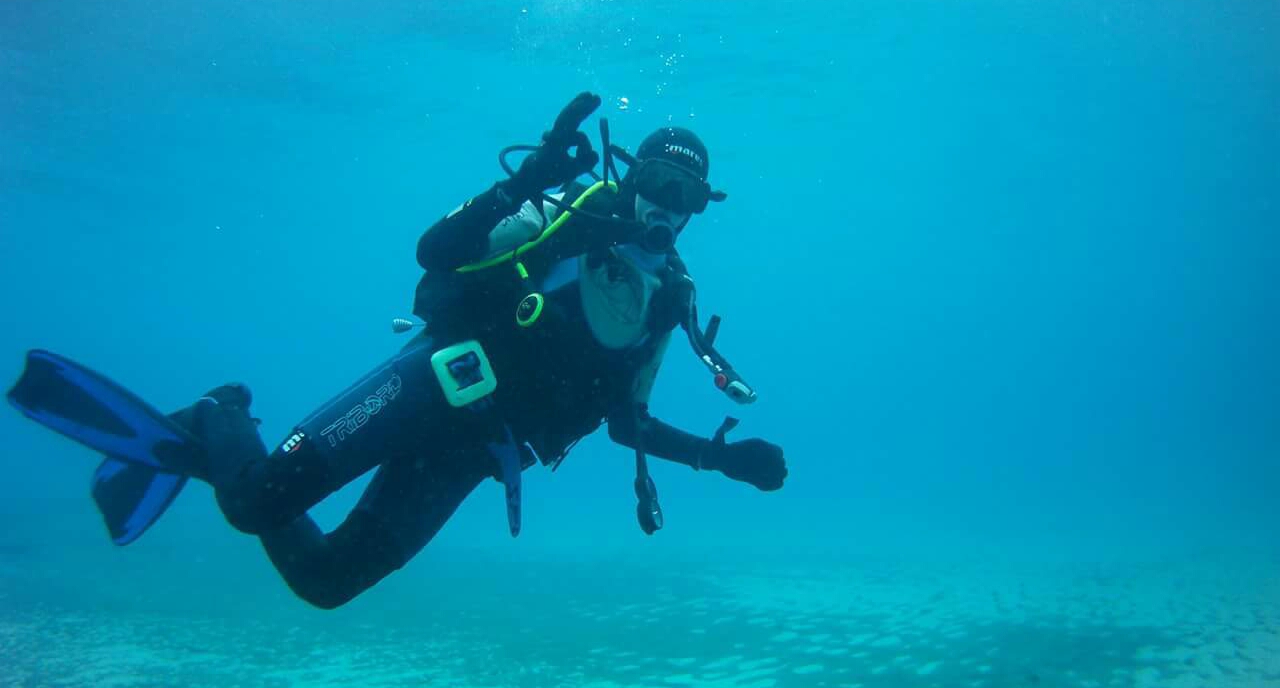 The superb coastline of the area offers an equally enchanting underwater world. The neighboring village of Stoupa hosts a scuba diving center that offers diving equipment, as well as courses for both beginners and experienced divers. 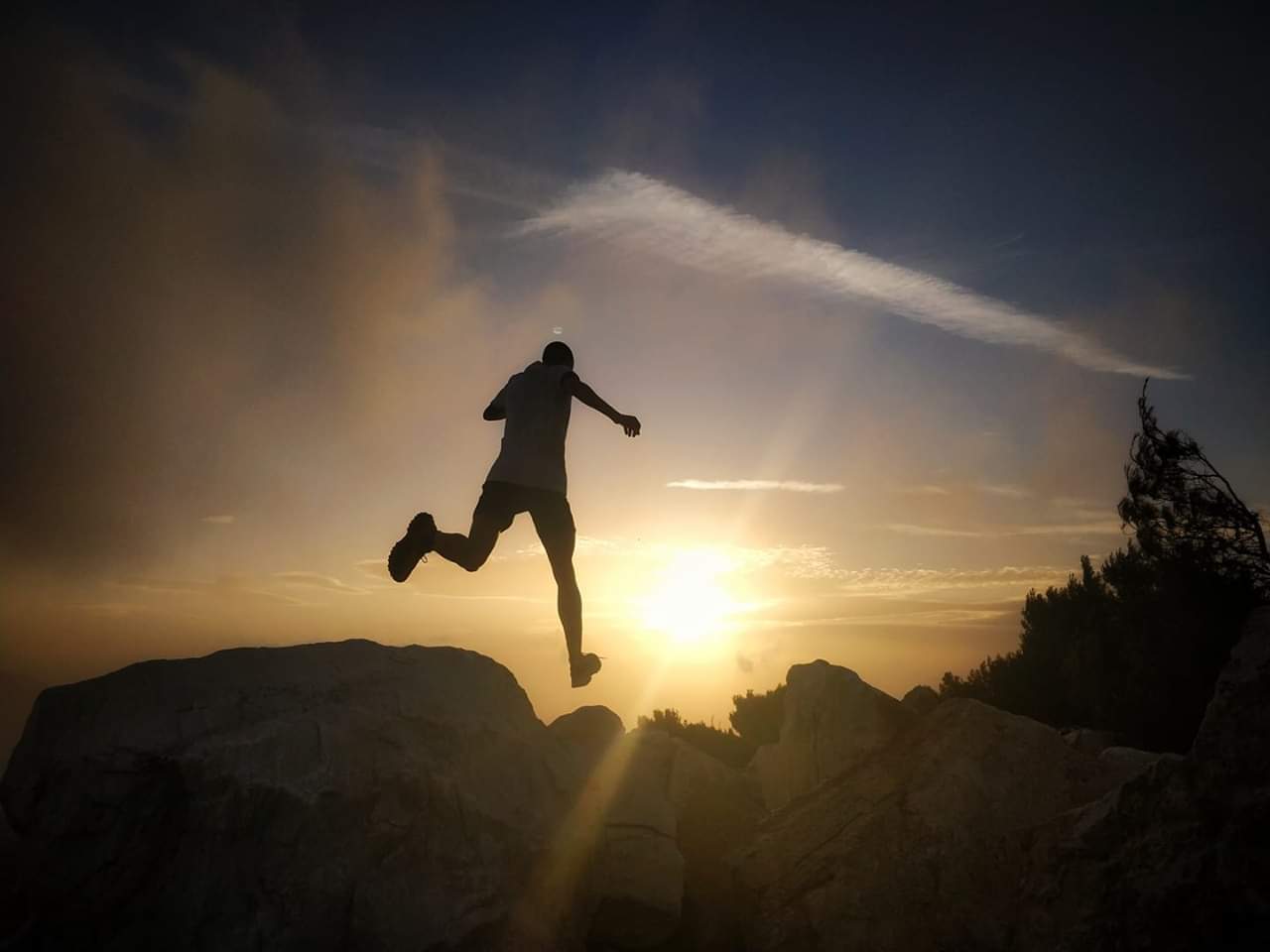 Irresistible, well-marked hiking paths lead inland or towards the imposing peak of Mt. Taygetus, while beautiful gorges, charming settlements, fortified towers and Byzantine and post-Byzantine churches attract nature and history lovers, as well as visitors from all over the world, with its well-preserved network of dirt and cobbled hiking paths, running or cycling routes, all well-mapped and marked.

One of the many attractions is the Gorge of Viros, just outside of Kardamyli, and home to two abandoned post-Byzantine monasteries. You can walk upstream to the Vyros River springs and admire the pristine landscape as it alternates between wild and serene. The area is blessed with another two beautiful gorges, the Gorge of Noupanti that opens out onto the beach of Foneas, and the Gorge of Ridomo, which runs down to Santova Beach, just outside of Kalamata. The hotel offers detailed hiking maps for those wishing to explore the area. Guided hiking, mountaineering and bicycling tours can be arranged. 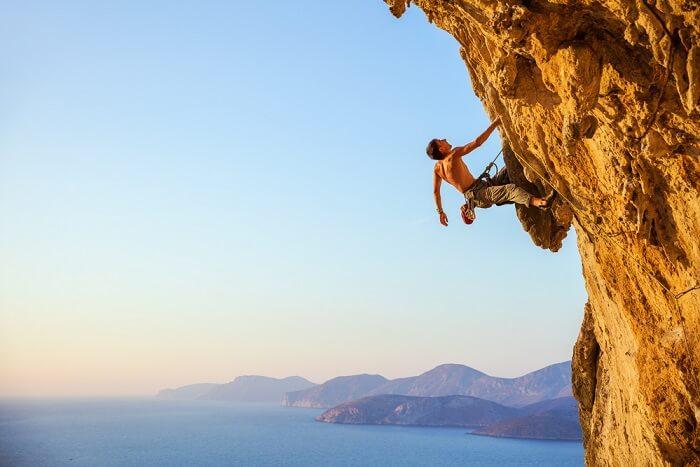 Between the settlement of Kalamitsi and the village of Proastio, an excellent climbing spot has been developed recently for fans of the sport. The climbing area of Agia Pelagia is ideal for climbing all-year-round and consists of 3 fields with 33 limestone routes of medium difficulty (from 5B to 6B).

Kardamyli is one of the oldest settlements of Greece, mentioned by its current name in The Iliad, the oldest work of Western literature, written by Homer around the 8th century BC. It is comprised of modern Kardamyli that stretches along the main road, the pre-revolutionary settlement of Lower Kardamyli, or Old Town, and the fortified Upper Kardamyli, on the edge of Viros Gorge. 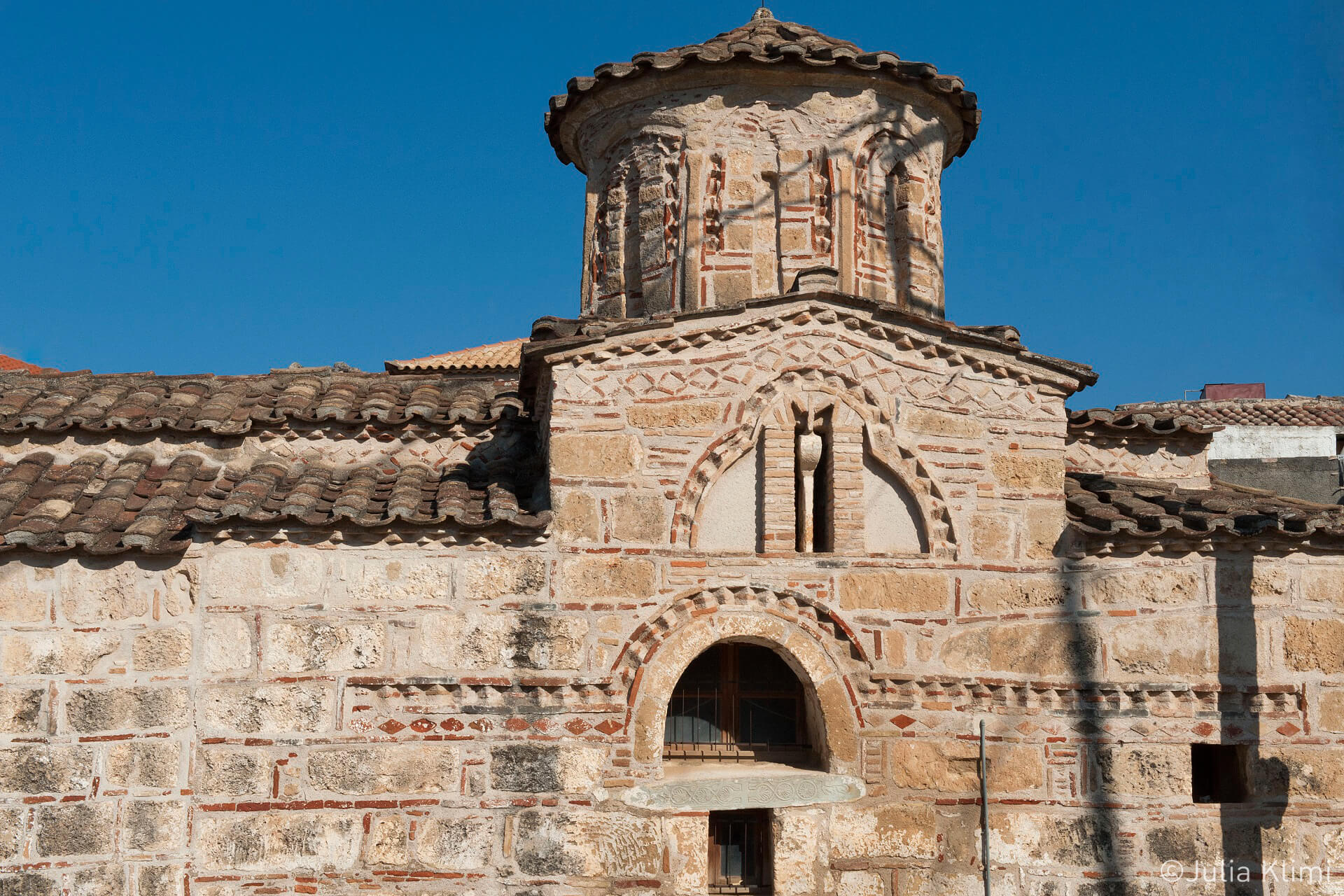 In the upper part of Kardamyli’s central square a huddle of well-preserved old stone houses form the Old Town or Lower Kardamyli. A pre-revolutionary settlement, it consists of 60 buildings, several of which are well-preserved tower-houses and fine examples of the evolution of Maniot architecture. The division of the houses into four distinct neighborhoods indicates that were built by four families.

The Fortress Complex Of The Troupakides-Mourtzinoi Or Upper Kardamyli
The fortress complex, built on a small, rocky hill at the northern end of the settlement of Kardamyli, dominates the entrance to the settlement, overlooking the Messinian gulf and its land crossings. It was the seat of the “captaincy" of Androuvista, which was ruled for more than 200 years by the Troupakis (Mourtzinoi), one of the most powerful family lineages of Mani, mentioned in written sources from the 17th century.

The construction of its first buildings is dated at the end of the 17th century, while continuous reconstructions and additions were carried out up until the beginning of the 19th century. The complex has three defensive enclosures which include a three-storey fortified house (“the ondas") with a kitchen and a cistern, a tall military tower, an olive mill, a forge and other auxiliary buildings, and the church of Agios Spyridon, which was the family church of the Mourtzinoi.

The fortress complex with its buildings has been designated as a historic monument. The heirs of the Troupakis-Mourtzinos, Maria and Eleni Boukouvalea, granted it in 1967 to the Greek state on the condition that it become a museum. Its restoration was carried out by the Ministry of Culture, the first phase from 1999-2004 (restoration of the tower house and its conversion into a museum dedicated to the settlements of Mani) and the second phase from 2012-2014 (complete restoration of all buildings of the complex – war tower, olive mill, church of Agios Spyridon and the outer courtyard).

On the premises of the complex, which constitute an archeological site open to the public, various cultural events are organized by the person responsible for the operation of the Ephorate of Antiquities of Messinia (concerts, temporary exhibitions of ancient and modern art).

Kardamyli during the Greek War of Independence. Kardamyli played its own glorious role in the Greek War of Independence. In January of 1821, Theodoros Kolokotronis – a most prominent figure of the 1821 Revolution – found refuge at the home of Panagiotis Troupakis-Mourtzinos, where together they began planning the revolution. On March 22, 1821, 2,500 Maniots marched from Kardamyli to free the city of Kalamata, along with the rest of Peloponnese, under the leadership of Kolokotronis, Troupakis-Mourtzinos and his son, Dionysios, and other eminent Maniots. At the entrance of the complex is seen a marble inscription from Kolokotronis’ memoirs commemorating the event. 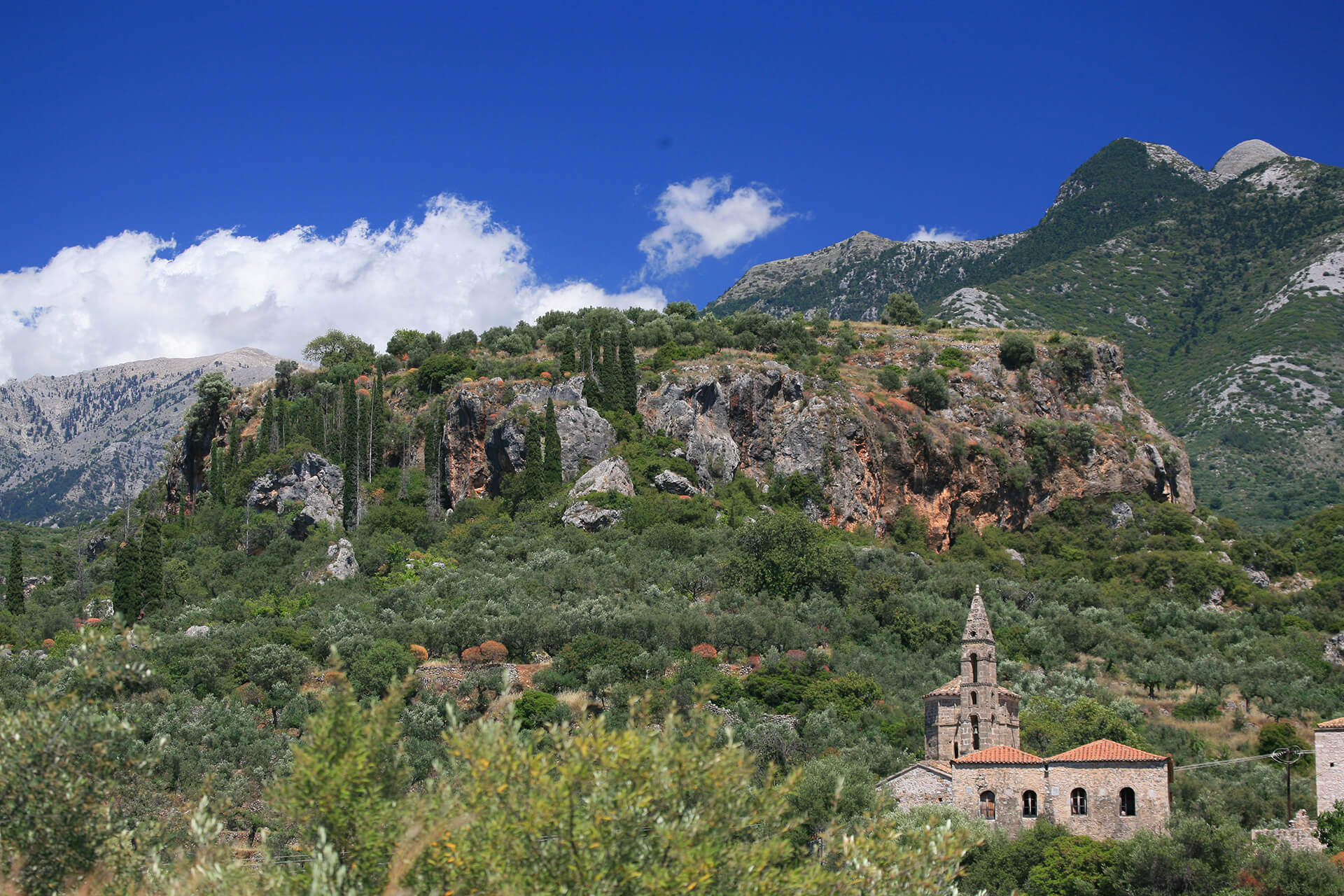 Above Upper Kardamyli lies a massive flat rock with dense vegetation and very difficult to approach. The ruins of ancient Kardamyli lie atop the rock – an archaeological site which still awaits excavations to reveal its secrets. The site is not accessible. 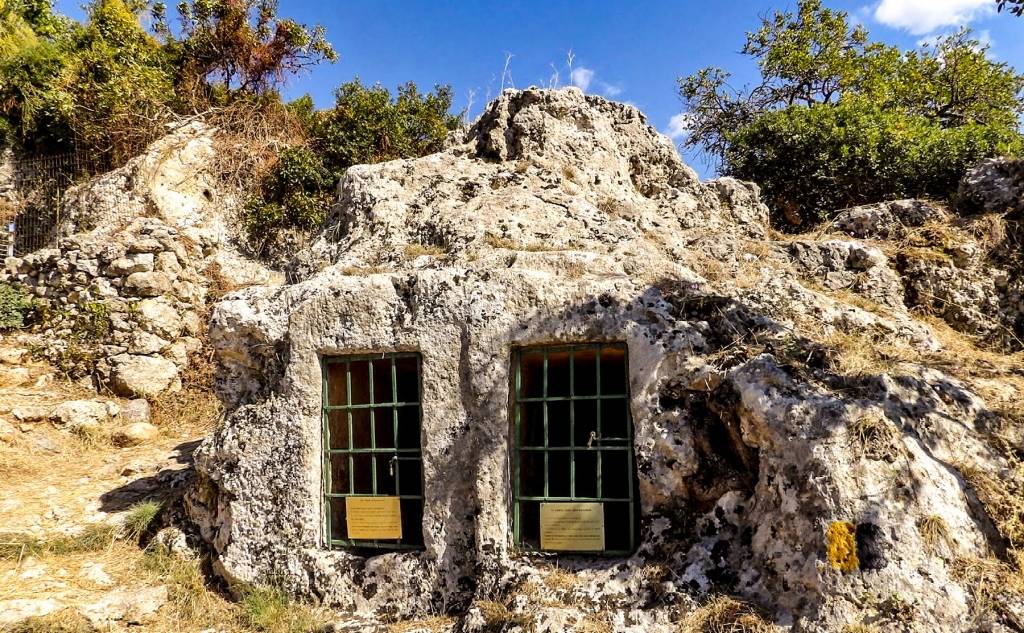 On the path from Upper Kardamyli towards the idyllic settlement of Agia Sophia, two identical tombs, carved in the rock are, according to Strabo, the tombs of the half-twin brothers Castor and Pollux (Polydeuces). Their mother was Leda, queen of Sparta, but they had different fathers. Castor was the mortal son of Leda’s husband Tyndareus, king of Sparta, and Pollux the immortal son of Zeus, who took the form of a swan and seduced Leda. According to one version of the myth, Leda laid two eggs, one with Castor and Pollux and the other with Helen of Troy and Clytemnestra. Pollux asked his father Zeus to share half of his immortality with his brother so that they might share the same fate. They were buried together to honor their brotherly love, and became the two brightest stars in the constellation, Gemini (twins, in Latin). Castor and Pollux were deities of the light, who personified integrity and endurance and were patrons of sailors, joining the Argonauts on their quest to find the Golden Fleece. 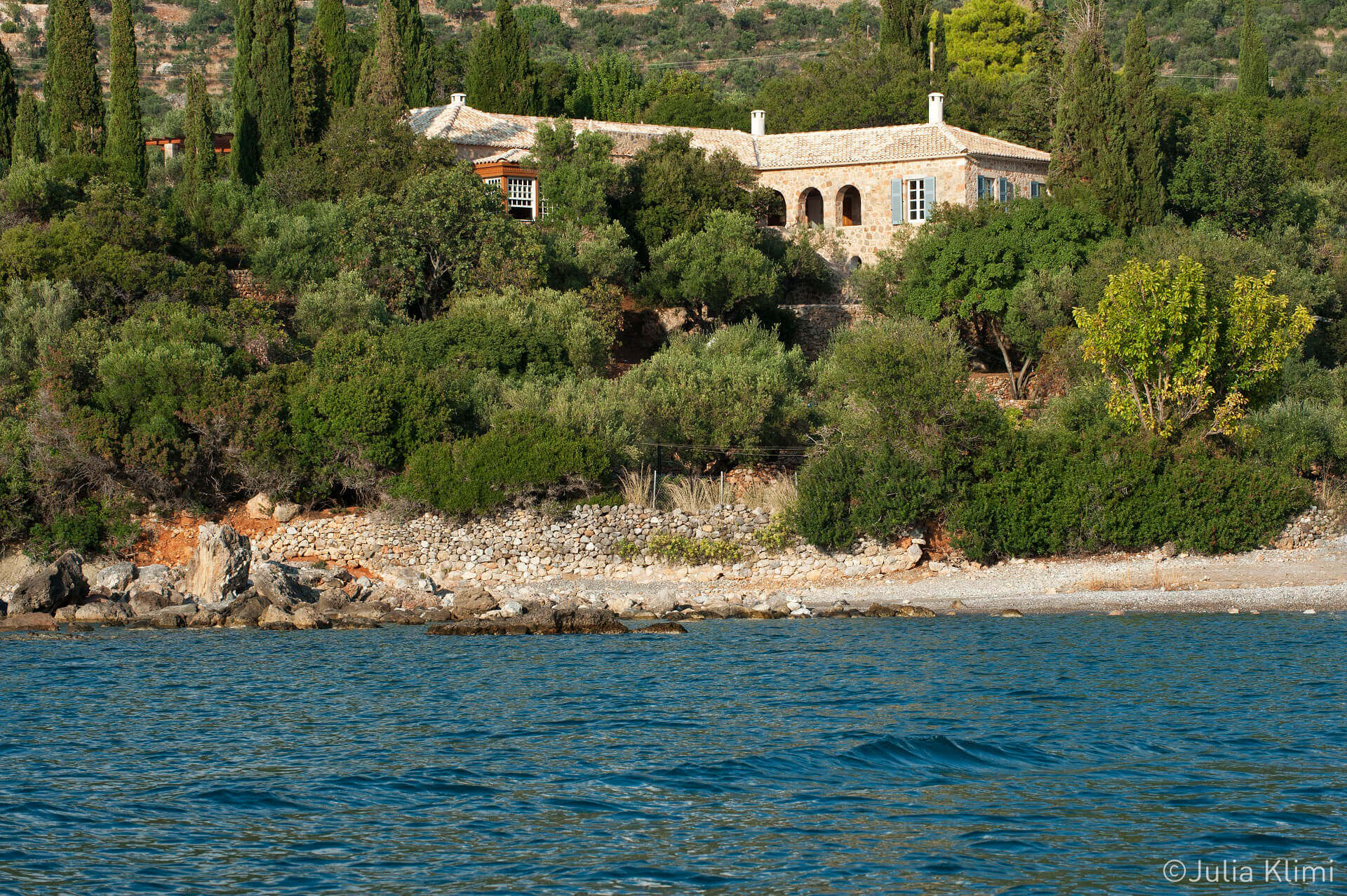 The house of legendary travel writer and World War II hero, Patrick ‘Paddy’ Leigh Fermor, and his wife Joan, is a reason in itself to visit Kardamyli. It is considered one of the most beautiful homes of Greece and the Mediterranean. Built from local stone in the 1960s on “a peninsula ending in crescent-shape beaches…into a gently sloping world of the utmost magical beauty”, in the words of Fermor himself, it was frequented from the 1970s to late 1990s by royalty, politicians, diplomats, writers and artists. Recently renovated, it is now open to the public. The house served as scenic backdrop for the 2013 Hollywood film ‘Before Midnight’, with Ethan Hawke and Julie Delpy. 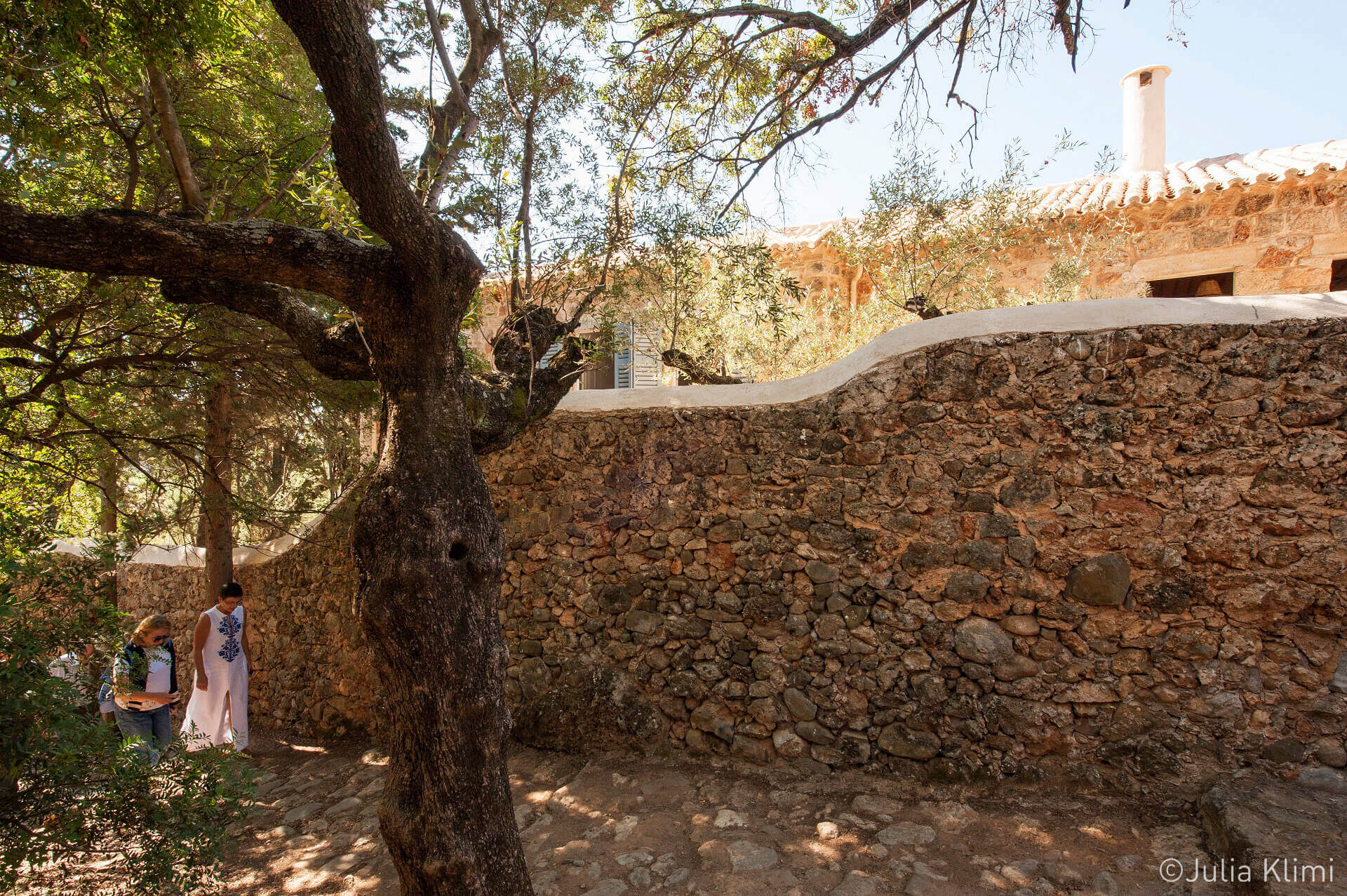 Following The Traces Of Kazantzakis And Zorbas

The actual events that inspired one of the classics of modern literature, ‘Zorba the Greek’ by Nikos Kazantzakis, happened a little outside of Kardamyli, at the lignite mines of Prastova and the Kalogria beach of Stoupa. Around 1916-1918, the young author and owner of the mines met Yorgos Zorbas, the man who served as inspiration for the main character in the novel. Zorbas, with his vivacity, simple philosophy and love of life, became the “life mentor” of the narrator and taught him: “…how simple and frugal a thing is happiness: a glass of wine, a roasted chestnut, a wretched little brazier, the sound of the sea. Nothing else.” The abandoned mine is located before the entrance to the settlement of Stoupa, to the left of the main road. In the right corner of the beautiful Kalogria beach Zorba’s humble home still stands. 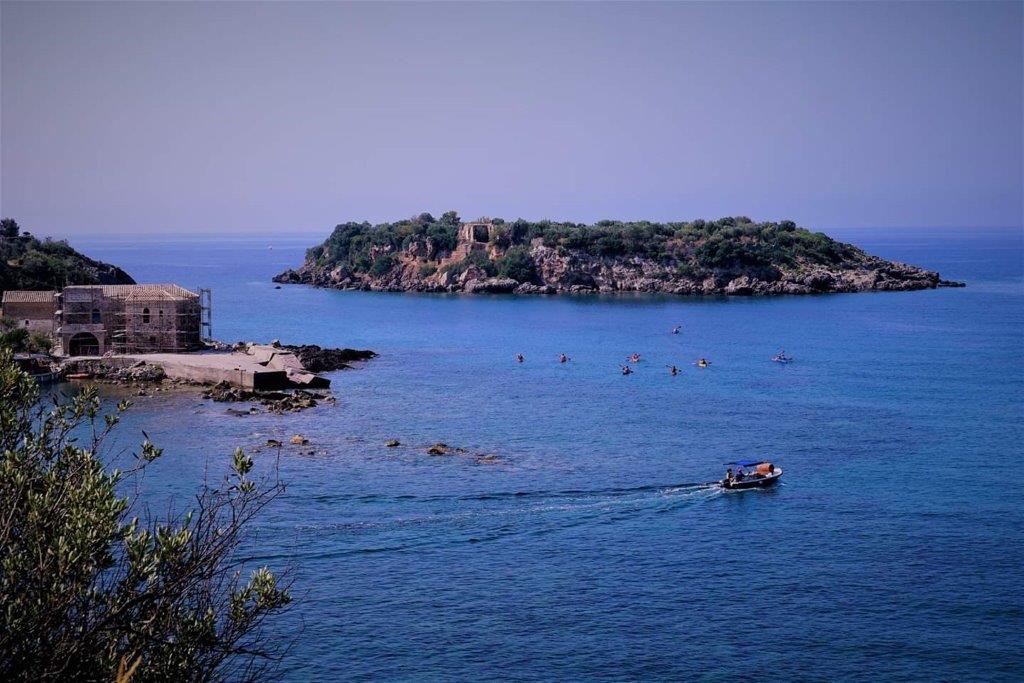 The “Mourtzini Customs" of Kardamyli

The customs house of Kardamyli is an architectural complex consisting of two stone buildings, the core of which (17th century) is a two-storey elongated fortified structure (“makrynari") that used to serve as a custom house and warehouse of the Troupakides-Mourtzini family (commanders of the “captaincy”  of Androuvista for more than 200 years) and is a typical example of pre-revolutionary Mani. It is located south of the denser part of the settlement of Kardamyli, in the bay with the old port. At a distance of 6 meters from the customs is the small post-Byzantine church of Ai Yannakis. In the same area rises the watch tower of Dimitreas which dates back to the 18th century, while in the sea opposite the customs lies the fortified island of Meropi.

The fortified islet, watch-tower and customs complex are part of the wider fortification network that protected Kardamyli and its port during the pre-revolutionary times.